Make sure you take your vitamin BFF

As I have stated in my previous post, I have been throwing my share of one girl pity parties lately. Add to that good time, 2 kids,(one who is a teenager, which if you didn't know, is like a kid on hormonal crack ) bills, work, bills and all the other fun daily must do's has left me feeling a tad bit blue.

One of my favorite ways to exorcise the demon crankstress that has possessed me all week is to hang with my best friend. Justine and I have been BFFS for over 20 years but the first year we met is an entirely different story.

In 1985 I was a new 8th grader at Thompson Jr. High. One thing I have learned through moving a few times growing up was that all the boy's loved you. While all the girl's loathed you. I was also painfully shy in new situations. This apparently indicating to the girls that I was a snobby bitch ( I know this because when I became their friend later they would tell me so ) and for the boys to move in for the kill.

One of those boys, who I will call " Hot Scott " was real cute and we started "going out" as we use to call it. All the while Justine had apparently been crushing on Hot Scott forever. This fact and other ridiculous 8th grade politics resulted in Justine becoming my arch nemesis through out that year.

Fast forward to Freshman year, 1986 the year of awful hair do's and even worse fashion statements. I walked into my first art class to see my old bud Hot Scott. (we are just friends now) We catch up and chat. We are having a good ol' time when who should walk in but Just-F'in-stine!!!...Really?....Not only was it Justine but she sat directly on the other side of Hot Scott. see diagram below 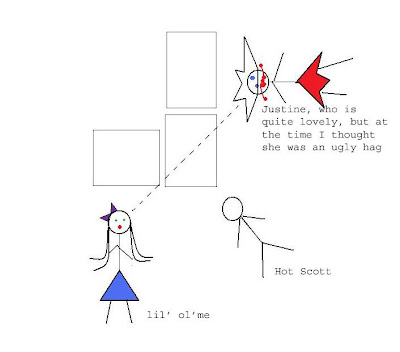 What you can also see in the diagram above is that not only did I have to sit in a close proximity to my arch nemesis, I had to look right at her ugly mug the entire time! as indicated by dotted line

The seating thing turned out to not so bad. Hot Scott made a great barrier and Justine and I managed to never speak. That was until we walked into art class to find Hot Scott had gone home sick. After getting over the shock and disgust we were both obviously suffering, we sat down and started working on our projects. Our conversation began with awkward boring small talk. Then before we knew it we were laughing up a storm. We had such a great time that we decided to meet up during our lunch period. Then at lunch the good time continued until Justine invited me over her house after school. That afternoon filled with singing cats, empty apartments, eating canned won-ton soup out of the pan while sitting on the floor and lots and lots of laughter, is one day that I will never forget. Ever since that day we have been attached at the hip. Even now that we are grown with families of our own. I still make time to talk and laugh with her. She is always the first I call when I need advice, laugh, cry or perhaps share a fun bit of gossip. ( I know, it's wrong, we are awful people ) Who is your bff and where/ how did you meet? 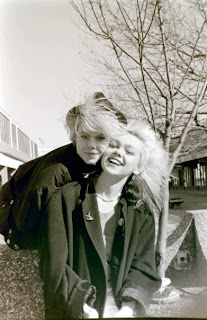 After a week of self loathing,pity parties and treating myself like (lets quote my eloquint son here) a poopy douche.....you can borrow it if ya want, it is kinda catchy......I would like to take some time to reflect on the ridiculous sites that I visit when I need a good laugh........... DRUM ROLL PLEASE!!!


Go visit these sites and please, let me know what you think. Do you have a favorite site to visit when you need a laugh?... DO TELL!
Posted by Sara Kitts at Friday, March 12, 2010 2 comments

Are comments your crack?